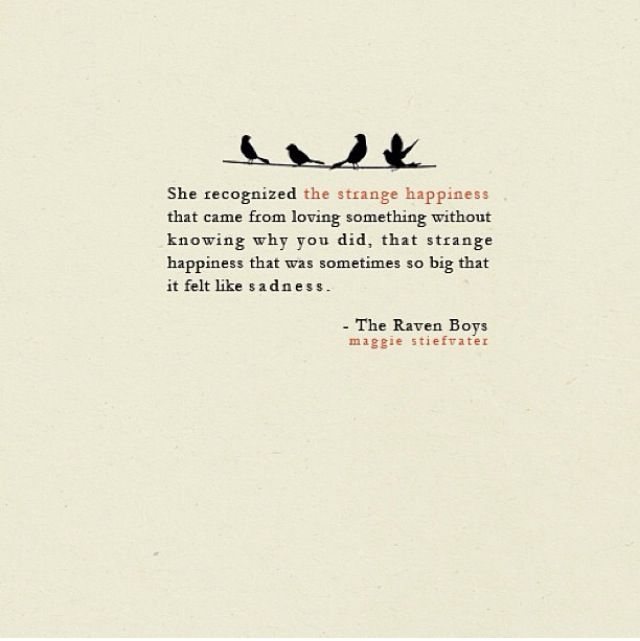 Okay, look. I have a problem with hyped up books. I have issues with people talking and talking about something and telling me to read it. I've been burned before (Allegiant ring a bell to anyone?) and sometimes I'm just not into the book that everyone else loves. No big deal, it's just me.

So I never read The Raven Boys or any of the rest of the series. I didn't really even have an inkling that I might want to read the books. Honestly, I don't even know why I picked it up in the first place two weeks ago.

I grabbed an audiobook of  The Raven Boys on my library app because I like to listen to books on my long ass commute to and from work and when I read. I had to wait about a week for the book, so I read some other stuff during that time, including Maggie's All the Crooked Saints, which I didn't love and therefore was wary of TRB. Okay, I also just remembered that because I read All the Crooked Saints I wanted to try TRB. Great, now we've come full circle.

Listening to books is something I've been doing since the summer. I was struggling with some training runs while training for the Chicago Marathon and a few people suggested changing what I listen to to help me, so I started listening to books. This also ignited arguments with people about whether or not listening to books counts as "reading a book". (It does, let's move on.)

The narrator of the series is Will Patton and it took me two and half books and a conversation with a friend about the narrator to realize who he was. Then I could only see his face reading the story.

With all that backstory over with, here's the deal. I'm going to try to do a mini review of sorts for each book and then you'll be obsessed too, okay? Okay. I'm not going to do full review like normal, with the synopsis of each book. I'll just post the synopsis to the first book. Honestly, you've probably all already read this book and I'm just over here two years late to the final book release. It's fine. I'll survive.

Synopsis:
“There are only two reasons a non-seer would see a spirit on St. Mark’s Eve,” Neeve said. “Either you’re his true love . . . or you killed him.”

It is freezing in the churchyard, even before the dead arrive.

Every year, Blue Sargent stands next to her clairvoyant mother as the soon-to-be dead walk past. Blue herself never sees them—not until this year, when a boy emerges from the dark and speaks directly to her.

His name is Gansey, and Blue soon discovers that he is a rich student at Aglionby, the local private school. Blue has a policy of staying away from Aglionby boys. Known as Raven Boys, they can only mean trouble.

But Blue is drawn to Gansey, in a way she can’t entirely explain. He has it all—family money, good looks, devoted friends—but he’s looking for much more than that. He is on a quest that has encompassed three other Raven Boys: Adam, the scholarship student who resents all the privilege around him; Ronan, the fierce soul who ranges from anger to despair; and Noah, the taciturn watcher of the four, who notices many things but says very little.

For as long as she can remember, Blue has been warned that she will cause her true love to die. She never thought this would be a problem. But now, as her life becomes caught up in the strange and sinister world of the Raven Boys, she’s not so sure anymore.

My Review:
Forbidden love, amirite? Like, sign me up. I'm here for it. Why didn't anyone ever tell me The Raven Boys was about forbidden love and shit? Why didn't I ever look it up on my own? Honestly, I don't know. I do know that I was immediately drawn into this story, starting with the graveyard scene. I loved Blue from the start and that made it easy to love everyone else who came along. Gansey, in all his glory, Ronan with his anger, Adam with his anger, and Noah. Oh, Noah. I love the slow burn of this book. The little tidbits you get about each character and how everything slowly starts to make sense and fall into place. The way they meet, fight, and love. Wow. Each one of these characters has such a huge dynamic with the other and the world building is fantastic. Even though it takes place in "rural" Virginia, there is magic. Ugh. So much magic. When I finished this book (it took about a week while driving), I was obsessed. I finished the rest within a weekend.

My Review:
I loved this insight into Ronan. He comes across as "the asshole" of the group, but his story is so, so deep. There are so many layers to him, his dreaming, and his feelings and I loved that we got to dig a little more into those. Even Adam started to grow on me a little in this book. He's not my favorite, by far, but I started to see a little bit more of him in this part of the series.

My Review:
This one was probably my least favorite of the series, but I can't really point my finger on it. Probably because Gwenllian is really annoying. The search for Blue's mother and Gansey's search, the fighting...Okay, I take it back. This one was full of drama and I loved it. My favorite part of this series is the little Blue/Gansey moments that are quiet and stolen and secret. Forbidden love will getcha every time.

My Review:
I started this book on a Monday when I was off from school. Somewhere out in the world there's a picture of me on the floor, just listening and feeling my feels. While prepping for this series to end, I tried to find spoilers and things (#savegansey) and made my way through a few other reviews. A lot of them thought the ending lacked a little, and while I do agree that one of the main things I wanted and waited for could have been more I was still pretty happy with the all around ending. These characters continue to grow, love, and laugh through each chapter. One of my very favorite things is the sarcasm that seems to seep through all of them. The addition of Henry to the Gangsey was a lot of fun. The relationships that finally get put out in the open made my smile like a big dummy over and over. The fact that my babies...well, you'll just have to read it if you want to know how they all end up.

You won't be disappointed, though. You can join me in my late to the party.

EDIT: I also ordered all four books in hardcover while still in the middle of the series and will probably read them again as soon as they get here.