(Review) Little Do We Know 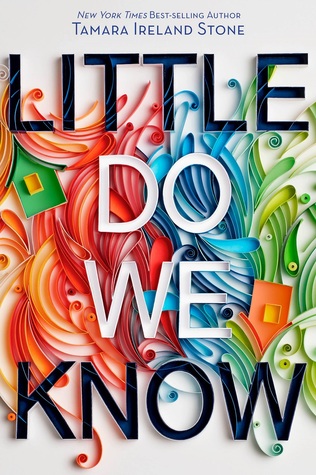 Goodreads Synopsis: Next-door neighbors and ex-best friends Hannah and Emory haven’t spoken in months. Not since the fight—the one where they said things they couldn’t take back.

Now, Emory is fine-tuning her UCLA performing arts application and trying to make the most of the months she has left with her boyfriend, Luke, before they head off to separate colleges. Meanwhile, Hannah’s strong faith is shaken when her family’s financial problems come to light, and she finds herself turning to unexpected places—and people—for answers to the difficult questions she’s suddenly facing.

No matter how much Hannah and Emory desperately want to bridge the thirty-six steps between their bedroom windows, they can’t. Not anymore.

Until their paths cross unexpectedly when, one night, Hannah finds Luke doubled over in his car outside her house. In the aftermath of the accident, all three struggle to understand what happened in their own ways. But when a devastating secret about Hannah and Emory’s argument ultimately comes to light, they must all reexamine the things they hold true.

In alternating chapters, a skeptic and a believer piece together the story of their complex relationship and the boy caught somewhere in the middle. New York Times best-selling author Tamara Ireland Stone deftly crafts a moving portrait of faith, love, and friendship.

My Review:
I've been a fan of Tamara for a long time and I've always loved her words. A year or so again I even won a giveway she hosted, with an ARC of Click'd and the rest of her books signed. I add this in because I've never won anything and it makes me happy.

As the book starts Hannah and Emory are already not speaking to each other. Each first chapter gives you a little glimpse into who each girl is separately and then you get little tidbits of their friendship. I love that their friendship was strong, even though didn't go to the same school or run in the same circles. That, to me, says a lot about each girl.

I liked Hannah a little more than I liked Emory at first. Hannah is quiet, but has a lot of LOUD thoughts. It's hard for her to voice them though. Emory, it seemed, didn't have any trouble voicing her opinions. But, as I read, I learned more about Emory and started to feel for her also.

This really is a great story of friendships that build and mend. I was wary about Luke's role in the situation from reading the synopsis, but I was pleasantly surprised by how much I liked his relationship with Hannah. I thought their friendship was based on something real and true for both of them, and I loved the scenes of them together. Luke was an A+ friend and boyfriend.

When the truth came out, it was sad. Knowing what each girl was holding in for all those months is, especially when you think about how close they were to one another.

Tamara's words never fail to evoke the feels in me. I'm glad I picked this one up.