(Review) The Raging Ones 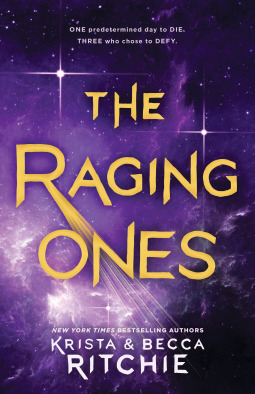 Synopsis: An edge of your seat sci-fi romance with twists and turns that you will never see coming!

In a freezing world, where everyone knows the day they will die, three teens break all odds.

Franny Bluecastle, a tough city teen, dreams of dying in opulence, to see wealth she’s never known. Like the entire world, she believes it’s impossible to dodge a deathday.

Until the day she does.

Court Icecastle knows wealth. He also knows pain. Spending five years in Vorkter Prison, a fortress of ice and suffering, he dreams of life beyond the people that haunt him and the world that imprisoned him.

Mykal Kickfall fights for those he loves. The rugged Hinterlander shares a frustrating yet unbreakable connection with Court—which only grows more lawless and chaotic as their senses and emotions connect with Franny.

With the threat of people learning they’ve dodged their deathdays, they must flee their planet to survive. But to do so, all three will have to hide their shared bond as they vie for a highly sought after spot in the newest mission to space. Against thousands of people far smarter, who’ll live longer, and never fear death the way that they do.

My Review:
Guyssssss. Sometimes it's really hard for me to get into sci-fi because it's just too...much? If it gets too technical and there are too many made up words/things it starts to not make sense to me.

The Raging Ones is simple, but I don't mean that in a bad way. The story is told from three different POV, those of the main characters Franny, Court, and Mykal.

Court and Mykal are linked through their senses and feelings, for some reason neither one of them understand. All they know is that they both dodged their deathday and they became linked. As the two of them are on a mission to earn cash to get them into StarDust, they feel Franny.

Soon enough they fall into a routine, the three of them. The become friends, in a way. Mykal is a bear of a boy, with a soft inside, while Court is the complete opposite. It's obvious he's the brains of the operation and the other two just seem to be along for the ride. I know they all have the same thing in mind and they are all worried about people finding out about their problems, but I couldn't really find a lot of feelings for Mykal. Franny grew on me, but Court is the only one who truly has a troubled past.

Court was easily my favorite character and he clearly carries the other two. Their relationships are complicated and it was fun to see the different ways they interacted with each other. Court is rough and I loved seeing how he let the others in.

The action is good, if not a little glossed over. The story definitely focuses more on the relationships and plot than all of the action.

The ending was all sorts of crazy, confusing action however. When things come crashing down for Court the other two are there to help him and to save him. There are also a few fun characters that help and hurt the trio. You'll love and hate them.

And you'll be on the edge of year seat after the ending. I know I was was.

So. When does the second book come out?

Thanks to NetGalley and the the publisher for the ARC.
2018 release arc friendship lgbt netgalley relationships science fiction series young adult