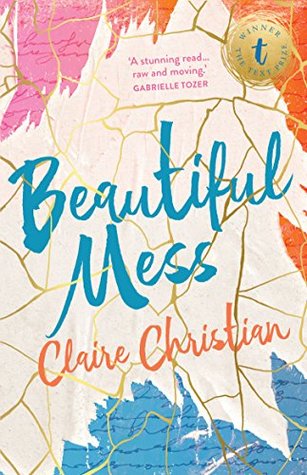 Synopsis: Since Ava lost Kelly, things haven’t been going so well. Even before she gets thrown out of school for shouting at the principal, there’s the simmering rage and all the weird destructive choices. The only thing going right for Ava is her job at Magic Kebab.

Which is where she meets Gideon. Skinny, shy, anxious Gideon. A mad poet and collector of vinyl records with an aversion to social media. He lives in his head. She lives in her grief. The only people who can help them move on with their lives are each other.

My Review:
Do you ever wonder if you've read the same book as other people? That's how I feel about Beautiful Mess.

This book had a lot of potential. I love a story that brings characters out of grief with the help of love, but this didn't really feel like that kind of story.

Ava is devastated when her best friend Kelly commits suicide. She lashes out during a school assembly, punches a classmate, and gets kicked out of school. It's at work where she meets Gideon (who goes to the same school as her but she's never noticed). Gideon is quiet and smart. He's got issues of his own. At first you think it's just social anxiety but you later find out he used to self-harm, to cope, Gideon writes slam poetry.

The relationship starts easy. They are friends. Gideon writes letters to Ava because he's on a self imposed break from the internet and phones. (It turns out some kids started a website about him for no real reason.) The letters are cute enough, but there's no real depth to anything, in my opinion.

The two obviously grow closer even though Ava has a very strange relationship with Kelly's older brother, Lincoln. Ava makes Gideon feel brave, but in the sense of "I just had sex" or "I hit someone". I didn't really see any growth from either of the characters. Ava is still selfish and rude, while Gideon depends on Ava to be "better".

The format of this book was also very strange. I don't know if it was my copy or not. I couldn't tell when the POV changes were and it made the whole thing very confusing. So. Interesting premise. I wish it could have been more.
1 star 2 stars 2017 release annoying mc arc edelweiss grief meh young adult