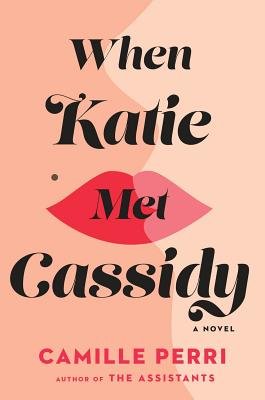 When it comes to Cassidy, Katie can't think straight.
Katie Daniels, a twenty-eight-year-old Kentucky transplant with a strong set of traditional values, has just been dumped by her fiancé when she finds herself seated across a negotiating table from native New Yorker Cassidy Price, a sexy, self-assured woman wearing a man's suit. At first neither of them knows what to make of the other, but soon their undeniable connection will bring into question everything each of them thought they knew about sex and love.

When Katie Met Cassidy is a romantic comedy about gender and sexuality, and the importance of figuring out who we are in order to go after what we truly want. It's also a portrait of a high-drama subculture where barrooms may as well be bedrooms, and loyal friends fill in the spaces absent families leave behind. Katie's glimpse into this wild yet fiercely tight knit community begins to alter not only how she sees the larger world, but also where exactly she fits in.

My Review:
I wasn't quite sure what I was getting into with this one. Originally I had thought it was a M/F romance, but it's obviously not, I just didn't read the description all the way. It happens.

Immediately I had some issues with Katie as a character, though. She's going through a hard time and is really struggling when she meets Cassidy. Her initial inner thoughts on Cassidy bothered me the most. They seemed very small-minded and stereotypical as she described what Cassidy looked like and what she was wearing.

Cassidy, on the other hand, is immediately attracted to Katie. She also seems like a bully to me. Katie learns that Cassidy has a bit of a reputation in the community, but seemingly can't stay away from her.

It's an interesting storyline and premise, but you never really learn too much about the characters. Katie strikes me as someone who just wants to "experiment" rather than start a relationship with a woman. She doesn't do too much thinking about it, from what I gathered. A lot of the times her thoughts and monologue were redundant and didn't hold my attention.

I liked that Cassidy changed and grew a little, but I felt that there was a lot missing. The dialogue was sometimes stale and Cassidy often sounded like a dumb joke rather than an intelligent lawyer.

In other news, though- this was a quick and easy read. It held my attention and I definitely wanted to see what happened at the end. I would've liked a little more depth within these characters and some more details as how they grew to fall in love.

Thanks for First to Read for the ARC.