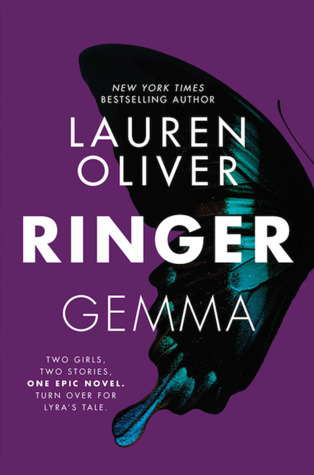 Ringer by Lauren Oliver
Publication Date: October 3rd, 2017
Pages: 528 (kindle)
Genre: Young Adult/Science Fiction
My Goodreads Rating: 4 stars
Goodreads Synopsis:
Like its ambitious companion novel, Replica, this far-reaching novel by powerhouse bestselling author Lauren Oliver digs deep into questions of how to be a human being in a world where humanity cannot be taken for granted.

In the world outside the Haven Institute, Lyra and Caelum are finding it hard to be human—and neither of them knows where they belong or who they can trust. When Caelum leaves without warning to pursue the dream of a place he belongs, Lyra follows him, convinced that together they will hunt down a cure for the illness that’s slowly consuming her mind. But what they uncover is a shocking connection to their past—even as their future seems in danger of collapsing.

After discovering the uncomfortable truth about her connection to the Haven Institute, Gemma struggles to return to her normal life. But when she learns that her controlling and powerful father has new plans for Lyra and Caelum, Gemma and her boyfriend, Pete, leave in the middle of the night to warn them of the danger they face.When an untimely accident derails them, they are mistaken for the escaped replicas and seized by strangers hired to capture them. The Haven Institute wasn’t destroyed after all, and now Gemma is the one behind the walls.

Lyra’s and Gemma’s stories can be read separately—with either story first—or in alternating chapters, but no matter which way you turn the book, the two distinct stories combine into one breathtaking experience for both heroines and readers alike.

My Review:
Getting a copy of Ringer was pretty exciting for me. I've been a fan of Lauren's for a million years so I was thrilled to get approved for this book.

Replica was just a little taste of the world of these girls and I loved diving deeper into their lives. When we left Gemma and Lyra they had both discovered some pretty harsh truths about themselves after the destruction of the Haven Institute.

Now, things are starting to unravel again. Gemma knows that Lyra isn't safe, even though Lyra isn't technically even a replica. She and Pete travel to find Lyra and Caelum to warn them...but things get all messed up after that.

It's interesting to read both girls' stories and know that they were going through trying times, while not together, but at the same time. It shows how the characters relate to each other and how they are both still trying to find themselves in the world.

Ringer, to me, was definitely more suspenseful than Replica. While in the first installment we were still getting to know the characters, here we were learning to love them and want them to be safe.

It's like Gemma and Lyra's lives are switched in the installment, with Gemma locked away with other replicas and Lyra trying to find out the truth. One thing that also stuck with me was their strength and the strengths of Caelum and Pete. I loved how supportive they were to these main characters and how they stuck with them.

This installment is definitely a little darker and delves into what it really means to be human. Kudos, again, Lauren Oliver. You've got me for life.

Thanks to HarperCollins and Edelweiss for the ARC.