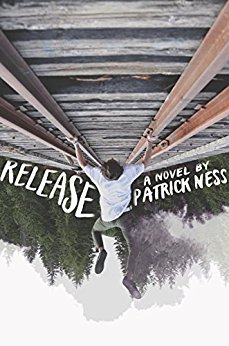 Goodreads Synopsis:
Inspired by Judy Blume’s Forever and Virginia Woolf’s Mrs. Dalloway, this novel by award-winning author Patrick Ness is a new classic about teenage relationships, self-acceptance—and what happens when the walls we build start coming down.
Adam Thorn doesn’t know it yet, but today will change his life.

Between his religious family, a deeply unpleasant ultimatum from his boss, and his own unrequited love for his sort-of ex, Enzo, it seems as though Adam’s life is falling apart. At least he has two people to keep him sane: his new boyfriend (he does love Linus, doesn’t he?) and his best friend, Angela.

But all day long, old memories and new heartaches come crashing together, throwing Adam’s life into chaos. The bindings of his world are coming untied one by one; yet in spite of everything he has to let go, he may also find freedom in the release.

From the New York Times-bestselling author of A Monster Calls comes a raw, darkly funny, and deeply affecting story about the courage it takes to live your truth.

My Review:
I'm a huge fan of Patrick Ness and was thrilled to get a copy of this book through Edelweiss. I think that Ness has a great way of incorporating those tough things that teens go through coupled with a dark humor that is still relatable.

Release was a great mixture of exactly that.

Adam is struggling with a lot of things. His very religious pastor dad, his perfect brother, his new boyfriend, and terrible boss. Life is pretty stressful for him and he's counting the days until he can get out of the town and away from it all.

I liked Adam a lot. He's funny and weird. Things have to be a certain way and he has to plan everything. Adam is still trying to figure out his life and it kills him that his parents don't accept him. When Adam takes something very serious to his father, his father turns it around like it's Adam's fault. It's heartbreaking to read and you really feel for Adam.

In spite of all of that, he is still strong and still himself. Adam has Angela and Linus to keep him afloat and it works well. Adam's brother plays a pretty big part toward the end and some of their interactions had me in tears and hit close to home. I believe a lot of people will relate.

There's a little mystery that goes along with the story, in true Patrick Ness style. A little ghost story follows the narrative and, while you think it has nothing to do with the actual story, they all sort of end up at the same place.

I think this was a great little story about how to be yourself and how to understand that you can't make people accept you. It just has to happen. If it's meant to be, it will be.