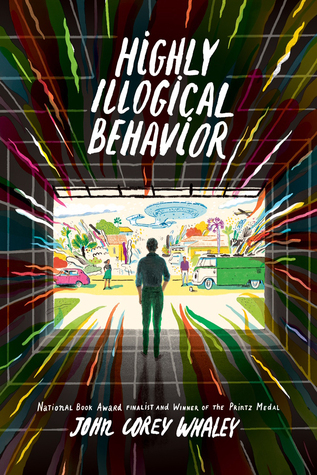 Goodreads Synopsis:
Sixteen-year-old Solomon is agoraphobic. He hasn’t left the house in three years, which is fine by him.

Ambitious Lisa desperately wants to get into the second-best psychology program for college (she’s being realistic). But how can she prove she deserves a spot there?

Solomon is the answer.

Determined to “fix” Sol, Lisa thrusts herself into his life, introducing him to her charming boyfriend Clark and confiding her fears in him. Soon, all three teens are far closer than they thought they’d be, and when their facades fall down, their friendships threaten to collapse, as well.

A hilarious and heartwarming coming-of-age perfect for readers of Me and Earl and the Dying Girl and All The Bright Places, Highly Illogical Behavior showcases the different ways in which we hide ourselves from the world—and the ways in which love, tragedy, and the need for connection may be the only things to bring us back into the light.

This book was a pleasant surprise, as most books are. I was a huge fan of When Things Come Back and was definitely excited to pick this one up.

Solomon is an interesting character, but not just because he's agoraphobic. Solomon is funny and smart, even though he's a little awkward. His family is weird and lovely. Solomon's parents and grandmother are all supportive of his choices. You know that they want more for Sol, but they aren't going to pressure him into anything.

Lisa is ambitious to the point of being kind of scary. I liked Sol as a character, but wasn't too sure about Lisa. She befriends Solomon on the basis of "fixing" him in order to use the information to get into college. Eventually Lisa lets her boyfriend Clark in on what she's doing and the three of them form a nice little group.

The story is told from two POVs, so you get both Sol's and Lisa's side of the story. Sol is innocent and forgiving. He's truly worried about every little thing he says and does in front of his friends. Clark is a lovely addition to the group and is a great buffer between the two main characters.

The inevitable drama could have been avoided had the characters discussed hings, but it's a YA novel, so they don't.

In the end, everything is right. I enjoyed the journey.

I love when things come together.