(Review) The Sun is Also a Star 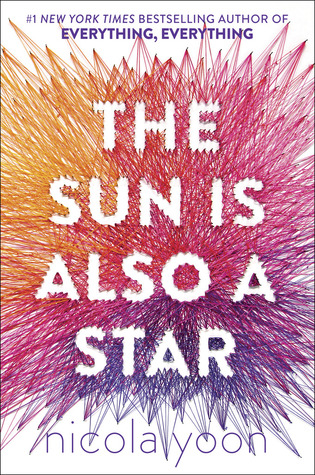 Natasha: I’m a girl who believes in science and facts. Not fate. Not destiny. Or dreams that will never come true. I’m definitely not the kind of girl who meets a cute boy on a crowded New York City street and falls in love with him. Not when my family is twelve hours away from being deported to Jamaica. Falling in love with him won’t be my story.

Daniel: I’ve always been the good son, the good student, living up to my parents’ high expectations. Never the poet. Or the dreamer. But when I see her, I forget about all that. Something about Natasha makes me think that fate has something much more extraordinary in store—for both of us.

The Universe: Every moment in our lives has brought us to this single moment. A million futures lie before us. Which one will come true?

My Review:
This was a cute book. That being said- it wasn't really my favorite. I'm not sure why and I can't really put my finger on anything specific, but I wasn't in love with it like I was Everything, Everything. I know I shouldn't compare the two, but it always happens.

Natasha and her family are illegal immigrants who are about to be deported because of a mistake her father made. Daniel is supposed to be on his way to an interview for Yale, a college he doesn't even want to go to. The two meet completely by accident: Daniel happens to see her standing in the middle of the street listening to a song and thinks she's beautiful. It gets a little stalkerish because then he follows her into a record store and after that he ends up behind her on the street.

After he saves her from nearly being run over the two stop for coffee. Daniel is immediately smitten. He's convinced he can make Natasha fall in love with him. She's not so sure. Actually, she's completely against it. So, he pulls out the scientifically proven questionnaire and asks for some time with her.

While the two of them wait for their equally important appointments they spend their time answering the questions and getting to know each other. The dialogue is great and so is the chemistry between the two characters, there's just something about the insta-love that I don't like. I mean, I liked the characters well enough. They are both intelligent teenagers who kinda/sorta know what they want out of life. Both of them are independent in the way that they don't like doing what their parents tell them to do but they do it anyway. They know that their families want more for them than what they had, but at the same time they want to live their own lives.

Their hopefulness is contagious, so the ending comes as a bit of a blow. Of course, readers of Everything, Everything shouldn't be too surprised with an ending like this one. Things don't always work out the way we want them to...or do they?

Read The Sun is Also a Star to find out.