(Review) Before it Gets Better 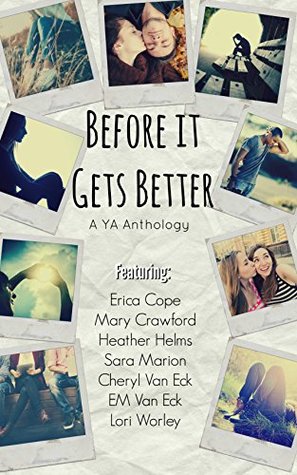 Goodreads Synopsis:
ALL proceeds will go to Love is Louder (A project of the JED Foundation)*

Forget Me Not by Erica Cope
Collins Bell is used to things not going her way. Abandoned by her mom as a small child, she's spent most of her life in and out of foster homes.
Starting a new school is never easy, but she’s just hoping to get through the day completely unnoticed--and preferably without a trip to the principal’s office.
The last thing she expects is to bump into the one person from her past that she thought she had a real connection to.
Only it’s not the reunion she dreamed it would be, because he seems to have completely forgotten all about her.

If You Knew Me (and Other Silent Musings) by Mary Crawford
Sadie Anderson used to being considered different and a little strange. Having the soul of an artist in her straight-laced, logical family is enough of a challenge, but being deaf isn’t making things easier.
Facing the challenge of a new high school with no friends, Sadie wonders if this will be the one place she’ll be free to be her true self. Maybe she should just focus on her art and ignore everything else.
Elijah Fisher has gone to the same school with the same friends since preschool. He dreads getting up every day because pretty much everyone on the planet hates his guts. It’s not news to him that he’s different, Tourette's syndrome is rather obvious that way. When cuss words fly of your mouth without warning, it’s difficult to make friends.
Why can the new girl in class see him when everyone else looks away? What would she think if she really knew him?

What If? by Heather Helms
Even though Liz has moved nine times, she still manages to keep up her grades and never has a problem making friends. As long as she's got her trumpet and a good pep band to play with, she's on track to a normal high school experience. That is, until Allie walks into her life.

Third & Long by Sara Marion
When you're young, they say you can be anything you want. That's true for most. When you come from a background like I do, life is hard. I had one path to get me out: football. It would change life for my mother and me and nothing would stand in my way. Then the unexpected happened that change my life. That day I, Rex Woodson, lost myself.
Consumed by darkness, one person showed up. She showed me a new path, but after everything I had gone through, would I be able to persevere?

Cross My Heart by Cheryl Van Eck
Mario Vasquez knows how the world views him. He’s a punk, a loser, a Mexican thug headed for trouble. But he can’t, no, he won’t let that discourage him. His world might be precariously balanced, but he is determined to fight his way out.
After all, he has promises—and secrets—to keep.

Free Fall by EM Van Eck
Over a year after a failed suicide attempt, Rowan returns to school in the middle of his senior year with a new perspective on life. He’s determined to make the best of his circumstances.
But, when past demons surface, he’s put to the ultimate test.
Will Rowan’s new lease on life stay intact or will he succumb to past bullies?
This is the story of one young man’s determination to see the light even in the darkest of moments.

Shedding Skins by Lori Worley
In life there are some traumas that change you from the inside out. Arlo Lane is trying to survive those changes without losing her mind.

My Review:
I've given this anthology as a whole three stars and will be giving a brief review and rating for each story in it.

Forget Me Not by Erica Cope Four Stars
This one was kinda of sweet and sad at the same time. Erica is becoming one of my favorite authors and that's pretty much what I expected from her. Collins and Asher met a long time ago, when they were just kids coming out of someting terrible. Now, here they are again. There's a little bit of mystery on Collins' side as to why Asher pretends he doesn't know her, but I think he has a good reason to. He's scared and doesn't want her to hate him. It eventually all works out, of course.

If You Knew Me (and Other Silent Musings) by Mary Crawford Three Stars
This was cute and sweet, but a kind of long-winded approach at defeating your bullies. I'll have to admit to skimming some of it because I was getting a little bored, but the message is still clear.

What If? by Heather Helms Two Stars
I couldn't really get into this one at all. Most of the characters were vile and the writing was pretty juvenile. I know it was from the perspective of a teenager, but it was hard to care about the characters. It also needed a little bit of editing.

Third & Long by Sara Marion Four Stars
I enjoyed this story a lot. I love when characters overcome huge obstacles and Rex did something pretty big. Jessalyn is a huge part in his life and pushes him to be the best he can be. It's heartwarming and a little sad.

Cross My Heart by Cheryl Van Eck Three Stars
Wow, this was a little dark. However, I can totally see where this could happen to someone in real life and the stakes that a big brother would go through to protect his little sister.

Free Fall by EM Van Eck Four Stars
Overcoming bullies, especially people who bully you for the choices of others is hard. I really enjoyed Rowan's story and the way he persevered through it all.

Shedding Skins by Lori Worley Two Stars
This covered a pretty heavy topic, but I didn't like the way that it played out. I felt that the beginning was a little out of line and hopefully when someone goes to report a crime that isn't how they are treated. It got pretty dark after that and every character just kind of pissed me off.

Huge thanks to Erica Cope for this copy in exchange for a review!