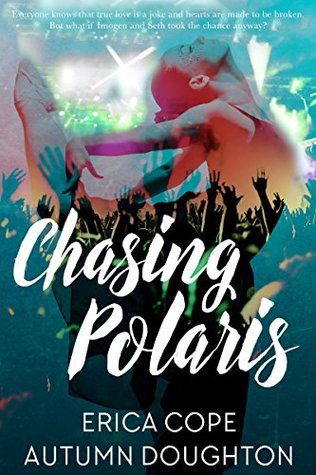 Goodreads Synopsis:
"Trust me,” he says.
"Trust is a lot to ask of someone you’ve just met."
"Okay, then a take a chance on me."

Imogen Shaw is done with this life, or at least she’s done pretending that everything is the same as it used to be. What was once so perfect and uncomplicated is ruined. Her dad, a person she thought could never disappoint her, turned out to be a liar and a fraud. All she cares about now is getting out of town and starting her new life in Boston. Love, she decides as she packs up her room and vows to put all of the hurt behind her, is just a delusion for suckers.

If anybody knows about things falling apart, it’s Seth Cavanaugh. With an alcoholic mother and a sister stuck in prison, Seth’s gotten used to taking care of himself. He figures he can handle anything life hurls at him because whenever people have let him down, music has always been there to carry him through. But these days even music feels like a stranger, and now Seth is in search of something more.

The setup is simple: A starry night, a scavenger hunt, one unlikely partnership, and two desperate hearts headed for each other on a collision course. In Chasing Polaris, Erica Cope and Autumn Doughton bring you another radiant story about misfits, catastrophic mistakes, and unforgettable discoveries. Simultaneously heart-wrenching and hilarious, Seth and Imogen’s journey is one that can’t be missed.

A girl.
A boy.
A fragile trust.

Everyone knows that true love is a joke and hearts are made to be broken. But what if Imogen and Seth took the chance anyway?

My Review:
So, I really want Autumn to be my best friend and I'm going to start with that. I mean, I love everything she writes and when I heard about Chasing Polaris my reaction was pretty obviously:

So, Imogen is a dancer who is getting ready to leave for school in Boston, which is plenty of miles away from her mother and her broken family. It's also away from her best friends, who are the reason she ends up in this whole mess to being with.

When her friends are stuck and need Imogen to help them win tickets to their favorite band Polaris,she does is. (She's the best friend ever.)

In the process of trying to get these tickets Imogen is informed that it's actually a contest- a scavenger hunt to be done with a partner. This, of course, doesn't really faze Imogen. She seems perfectly fine completing the hunt on her own.

Until Seth jumps in. You may think that Seth's motives are pure: he's trying to save Imogen from his sleazy friend. Such a gentleman, right? Okay, he kind of is a gentleman, but still.

There's definitely chemistry from the two of them right off the bat. Imogen puts up with no crap and isn't afraid to tell it like it is. You can tell she's attracted to Seth but instead of working it for her benefit she lies and tells him she's taken. She's leaving and doesn't want any strings, so she spends most of the night pretending he's not super cute and interesting.

Seth is great, except for that one thing when he doesn't tell Imogen who he really is. He helps her out and challenges her to do, well, the challenges.

This book has great banter, chemistry, and shenanigans. I love the back and forth of the two main characters. But, while there's banter and cuteness and fun, there is also something deeper between the two of them. Somewhere during the night Imogen and Seth start to trust each other and to open up. They've both been hurt and neither one of them have led a perfect life. Both of them have huge obstacles in their life when they meet and I think that the situations are written well.

Chasing Polaris is a great reminder that we can be having the time of our lives, but still be struggling silently. Not everyone knows what another person is going through, and this book does a nice job of showcasing that. While the two main character do become fast friends, I feel that their friendship or relationship is true because they really opened up to one another.

I loved this book. Can I have more?