(Review) Daredevil: The Man Without Fear 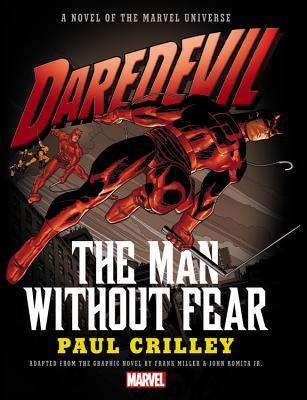 Goodreads Synopsis:
A guilt-ridden father. A harsh mentor. A passionate lover. What drives the Man Without Fear? Matt Murdock was raised by a single father, an over-the-hill prizefighter with one last chance to make good - a chance that cost him his life. Taunted and tormented by other children, Matt's life was irrevocably altered after he was blinded by radioactive materials while saving the life of an old man. The payoff? An unbreakable will and a keen intelligence, helping focus the super-senses with which he was blessed during the accident. His story is one of love, pain, disappointment, and strength. In this brand-new adaptation, witness the strange machinations behind the life of one of Marvel's most beloved heroes.

My Review:
I've been mildly obsessed with Daredevil since Netflix aired season one and I binged it in a day. Maybe that makes me a bandwagon fan, I'm not sure. It probably wouldn't help if I said I've been a fan since that Ben Affleck incident that we wont speak of, right?

Anywho, I love Charlie Cox's portrayal of Matt Murdock and that got me into the comics. My sister picked up The Man Without Fear on a whim and I loved it. I was super stoked to get this as a Christmas gift from some random person (I'm not kidding, it was weird).

This is a great explanation of Daredevil's origin. It starts with a present scene and then cuts to the beginning, starting with Jack Murdock and how things started to spiral downwards for him. Crilley does a great job getting into other characters' heads, including Jack's. He's got genuine concern for Matt, but he knows that there isn't anything he can do under the control of he mob. Anything will put himself and his son in danger.

This book tells about Matt's life before and after the accident. It's a little bit of behind-the-scences of how he came to be the Daredevil.

The storyline line is decent and it's a great introduction of to a lot of interesting characters. I feel like a lot of this was ripped right from the show (or the show was ripped from here, IDK), but it definitely kept my interest. Some parts were a little gruesome (which I feel derives from the show) and some of the fight scenes are things that are better off scene in illustrations rather than written words.

I loved the honesty of Matt's voice and how he literally has no idea what he's doing. I think that's one of my favorite things about Daredevil. I feel that he never has a plan, worries about his feelings interfering with things, and then somehow manages to come out on top.

This book was a great extension of a great comic. I enjoyed it.