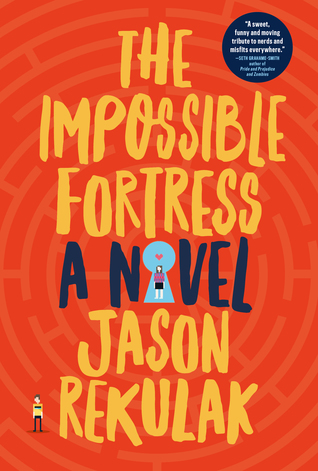 Do you remember your first love?

The Impossible Fortress begins with a magazine…The year is 1987 and Playboy has just published scandalous photographs of Vanna White, from the popular TV game show Wheel of Fortune. For three teenage boys—Billy, Alf, and Clark—who are desperately uneducated in the ways of women, the magazine is somewhat of a Holy Grail: priceless beyond measure and impossible to attain. So, they hatch a plan to steal it.

The heist will be fraught with peril: a locked building, intrepid police officers, rusty fire escapes, leaps across rooftops, electronic alarm systems, and a hyperactive Shih Tzu named Arnold Schwarzenegger. Failed attempt after failed attempt leads them to a genius master plan—they’ll swipe the security code to Zelinsky’s convenience store by seducing the owner’s daughter, Mary Zelinsky. It becomes Billy’s mission to befriend her and get the information by any means necessary. But Mary isn’t your average teenage girl. She’s a computer loving, expert coder, already strides ahead of Billy in ability, with a wry sense of humor and a hidden, big heart. But what starts as a game to win Mary’s affection leaves Billy with a gut-wrenching choice: deceive the girl who may well be his first love or break a promise to his best friends.

At its heart, The Impossible Fortress is a tender exploration of young love, true friends, and the confusing realities of male adolescence—with a dash of old school computer programming.

My Review:
I was definitely intrigued by this book and its description, so I figured I'd give it a go. I was pleasantly surprised and happy I'd requested it!

Billy is a pretty normal kid. He's got two best friends who are kind of weird and, well, so is he. Despite his poor grades and the fact that he says some really stupid stuff, Billy is really great at computers.

When Playboy releases pictures of Vanna White the boys kind of go crazy. They want the magazine but aren't old enough to buy and every plan they come up with fails. Eventually someone else helps them hatch a plan that involves getting the alarm code for the store they want to get the magazine from. Unfortunately that means tricking the girl who works there to give them the code.

Billy volunteers to hang out with Mary to get the code, but what starts as a trick turns into something more.

I really enjoyed the way that Mary and Billy's friendship grows throughout the story. Billy goes in without really caring about anything and seems to change as the story progresses. His friends have one-track minds and don't really grow through the book, but I see a little more in Billy.

The story itself is typical of fourteen-year-old boys. They are crass and rude. They say mean things about each other, their parents, and girls. I wasn't that shocked to read what they said, but it's always difficult to be in a teenage boy's head.

I appreciated the little bit of growth that Billy made and liked how he stood up for Mary to his friends. The end of the book was a little heavy with drama. There was a twist I wasn't really expecting, but I was pretty happy with the ending. The friends turned out to be better than they were in the beginning, so that's always good. I liked how the relationship between Billy and his mother played out, as well as him and Mary.

This is a pretty good story about growing up and learning that the world is bigger than just you.

Check it out in February.