(Review) All Our Wrong Todays 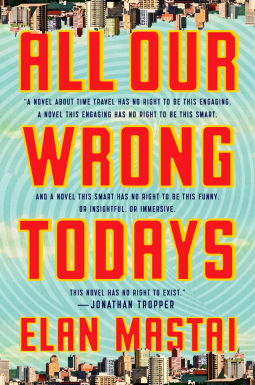 You know the future that people in the 1950s imagined we’d have? Well, it happened. In Tom Barren’s 2016, humanity thrives in a techno-utopian paradise of flying cars, moving sidewalks, and moon bases, where avocados never go bad and punk rock never existed…because it wasn’t necessary.

Except Tom just can’t seem to find his place in this dazzling, idealistic world, and that’s before his life gets turned upside down. Utterly blindsided by an accident of fate, Tom makes a rash decision that drastically changes not only his own life but the very fabric of the universe itself. In a time-travel mishap, Tom finds himself stranded in our 2016, what we think of as the real world. For Tom, our normal reality seems like a dystopian wasteland.

But when he discovers wonderfully unexpected versions of his family, his career, and—maybe, just maybe—his soul mate, Tom has a decision to make. Does he fix the flow of history, bringing his utopian universe back into existence, or does he try to forge a new life in our messy, unpredictable reality? Tom’s search for the answer takes him across countries, continents, and timelines in a quest to figure out, finally, who he really is and what his future—our future—is supposed to be.

My Review:
This book was...different. I didn't dislike it, and I thought it was very promising, but it was also a little confusing? Yes, that's a question.

Okay. First of all, this book was a little tough to get into. I put it down a few times because it didn't grab my interest right away. I think a lot of that had to do with the narrator. For a guy who was not, in any way, special or intelligent Tom was, to me, condescending and full of himself.

For the majority of the book, most of the narrative is about time travel and science-y things. Maybe I'm going to sound like an idiot for this...but I just don't care for the nitty gritty details about stuff like that. I'm more interested in the people part of the story and, unfortunately, we don't get that for a while.

So, Tom is an understudy to a chrononaut, Penelope. Penelope wanted to be an astronaut but it turns out the minute she enters outerspace she forgets everything. So now she wants to be a time traveler. Only Tom falls in love with her, something happens, and then something even more terrible happens.

Instead of accepting his face, Tom decides to try out the time travel thing anyway. Even though he doesn't know how to work the equipment and he's kind of an idiot, he just goes for it.

And it's, of course, a disaster.

Once Tom messes everything up the story kind of picks up. Only then there are some strange tangents that are also hard to follow. I did appreciate that there were new characters introduced that Tom seemed to care about, who also cared about him.

I honestly think that this was a good book, but a lot of it seemed too much for me. Like I said, maybe I'm small-minded but I would have liked to have seen more relationship development that all of the time travel-ly vocab and the big words.