(Review) All the Good Parts 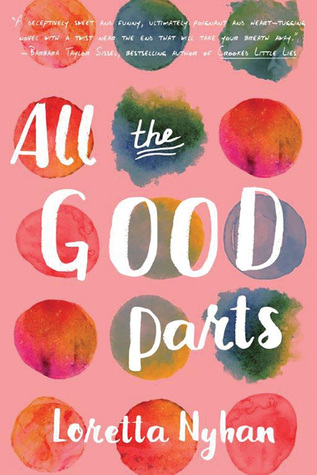 Goodreads Synopsis:
At thirty-nine, Leona Accorsi is broke, single, back in school, and living in her sister Carly’s basement. She’s perfectly content being quirky Auntie Lee to Carly’s four children. That is, until Leona’s doctor tells her that if she wants to have a child, she’d better do it now.

Leona does want a baby. She always has, but the circumstances have never been right. Now she has a huge decision to make: face motherhood on her own or risk missing out on its rewards.

Unfortunately, she’s let her romantic life go stagnant. She barely even knows any single men. She has just a few prospects: a Vietnam vet and partial amputee, his intimidating son, the sweet but troubled man who tutors her niece, and a fellow nursing student she’s never actually met.

As Leona discovers more about each one, she realizes any of them could be the right man for the job. The more important question is, has she become the right woman?

My Review:
I thought the premise of this sounded super cute and I was really excited to read it, but was a little disappointed when I finally got down to it.

Leona is an okay character. She doesn't really have anything going for her and for being an almost-forty-year-old she's incredibly naive and a little annoying. Leona has no idea what she wants out of life and really has no way to get it either.

When her doctor tells Leona that her time for having children is running out she immediately jumps to the idea of finding a donor. Leona thinks about everyone from the old man she works with at home health care to the homeless man who tutors her niece.

The story follows Leona through the thought process of figuring out if she's ready to have a kid, along with what everyone else thinks about her, too.

Personally, I didn't see a lot of growth when it came to any of the characters. It was hard to connect with any of them, especially Leona. It seemed like the more she tried, the more she messed up her life and the lives of those around her.

There were a few cute, family moments and some sweet times with Leona and her friends. I spent the majority of the book wondering when something exciting and fluffy was going to happen, but it wasn't until the very end of the book when that happened.