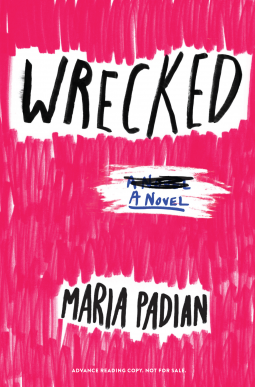 Net Galley Summary:
Everyone has a different version of what happened that night at MacCallum College. Haley was already in bed when her roommate, Jenny, arrived home shellshocked from the wild Conundrum House party. Richard heard his housemate Jordan brag about the cute freshman he hooked up with. When Jenny accuses Jordan of rape, Haley and Richard find themselves pushed onto opposite sides of the school's investigation. But conflicting interests fueling conflicting versions of the story may make bringing the truth to light nearly impossible—especially when reputations, relationships, and whole futures are riding on the verdict.

Maria Padian offers a kaleidoscopic view of a sexual assault on a college campus. Wrecked will leave readers thinking about how memory and identity, what's at stake and who sits in judgment shape what we all decide to believe about the truth.

My Review:
Okay, I liked this book. It kept my interest and definitely made me think about what was going to happen next. The writing style was simple, but not bad. Same goes for the characters. I think this was a good book, but there could have been a little more depth to it.

The story is told from both Haley's and Richard's points of view. The two meet and become friends after Haley's roommate, Jenny, is raped at a party. Haley and Richard are both decent characters but, like I mentioned, there could have been a little more depth to them. Haley is an athlete who has been benched because of an injury. She's smart and funny, but that's about it. She isn't a great friend to Jenny, even though she agrees to be Jenny's advisor during the rape trial.

Richard is pretty much the same way. He's a nice guy, who has a habit of sticking his foot in his mouth and saying dumb things that boys say. Jordan, Jenny's accused rapist, want Richard to help him during the trial and Richard agrees, despite his better judgement.

You can probably guess that this is where things get complicated. Richard and Haley are cute together when they aren't arguing about the case that they aren't even supposed to be talking about. Each "date" turns into a petty fight and it's a vicious cycle throughout the whole book.

The book also mainly focuses on the rape trial, with each chapter starting with a little flashback from that night. It's almost like a guessing game to figure out what exactly happened between Jenny and Jordan.

I felt that this aspect of the story was handled well and realistically. It showed both sides well as well as the politics that, unfortunately, get involved.

This story was decent, but I would have liked to see the characters fleshed out a little bit more.

Thanks to NeGalley and Algonquin Young Readers for the ARC.