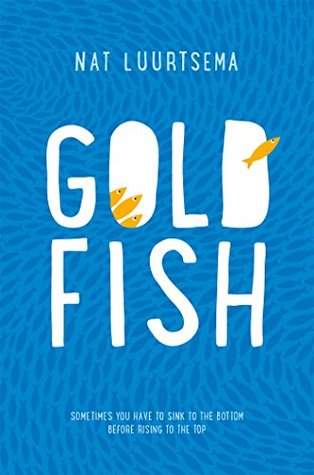 Goodreads Synopsis:
I am Lou Brown:

I was on the fast track to the Olympic superstardom.

Now, I'm training boys too cool to talk to me. In a sport I just made up. In a fish tank.

Nat Luurtsema's YA debut is side-splittingly funny and painfully true to anyone who's just trying to figure out how they fit into the world.

My Review:
Lou's description of her life pretty much sums up this book, to be honest. It was weird. It starts with Lou, a competitive swimmer, losing a race spectacularly and basically getting shunned by her whole team.

Lou is a fifteen-year-old girl who is a little strange to begin with. She lives with her divorced parents and her sister, a popular girl at school. Her best friend Hannah didn't suck at the swim tryouts and is at a fancy training camp, so we don't even meet her until the end of the book.

A lot of this story really just takes place in Lou's head which, like I said, is a weird place. It's typical teenage girl thoughts so I got a little annoyed with her slang and drawing out words like okaaaaaay. (This happens a lot,)

Lou is sulking one night when three boys come to her asking for advice. They want to be on Britain's Hidden Talent, but need something really good because they've already failed one round. Lou and the boys get the brilliant idea of underwater dancing. Like synchronized swimming but edgier, I suppose.

There are actually some funny moments and some heartfelt stuff in here, but a lot of it is masked by Lou's attempts at sarcasm. I didn't really think she was that funny, but I was already annoyed with her.

I did like Lav and Gabe, her sister and friend, however. Lav was fun and supportive, no matter how mean Lous was to her. Gabe is one of the boy swimmers and is nice to Lou even though she's kind of an idiot sometimes.

The story itself is fun. A lot of ridiculous things happen (I mean, it's underwater dancing) but I think the message still gets through: be yourself and find your people.