(Review) All of Us and Everything 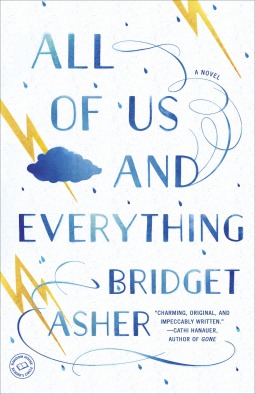 All of Us and Everything by Bridget Asher
Publication Date: November 24, 2016
Pages: 352(paperback)
Genre: Adult Fiction
My Goodreads Rating: 3 Stars

Goodreads Synopsis:
The Rockwell women are nothing if not . . . Well, it’s complicated. When the sisters—Esme, Liv, and Ru—were young, their eccentric mother, Augusta, silenced all talk of their absent father with the wild story that he was an international spy, always away on top-secret missions. But the consequences of such an unconventional upbringing are neither small nor subtle: Esme is navigating a failing marriage while trying to keep her precocious fifteen-year-old daughter from live-tweeting every detail. Liv finds herself in between relationships and rehabs, and Ru has run away from enough people and problems to earn her frequent flier miles. So when a hurricane hits the family home on the Jersey Shore, the Rockwells reunite to assess the damage—only to discover that the storm has unearthed a long-buried box. In a candid moment, Augusta reveals a startling secret that will blow the sisters’ concept of family to smithereens—and send them on an adventure to reconnect with a lost past . . . and one another.

My Review:
The Rockwell women are complicated. To me, that's an understatement.

Some people might use the word "crazy", even though it's definitely a trigger for certain characters.

This book follows each of the Rockwell women through a journey following Hurricane Sandy. After a mysterious box surfaces and the girls return to their childhood home, Augusta decides to tell her daughters the truth. Well, she's told them the truth but they just didn't believe it.

Each of the daughters are dealing with their own personal issues and, of course, each of them believe that they are the center of the universe. The girls are selfish, lonely creatures who don't even really seem to like each other. This happens to be a big issue in the book. The sisters, in meeting their father and discovering that their mother wasn't lying to them the whole time, have many heart-to-hearts about their relationships with each other.

I liked this book for the family aspect of it. It was nice to see that, after all the arguing, the family was able to come together. Nick, Augusta, and Atty were great characters. They were fun, but real and a good buffer between the sisters.

They, on the other hand, I found a little annoying. This book was described as "quirky", but I think the sisters were bordering on mental instability. They are written well and true, however. None of them apologize for being themselves, but the do many to grow a little.

This was definitely an interesting book, if not heavy at times. It took me a while to get through it because of that. A great read if you love family drama.