(Review) Down with the Shine 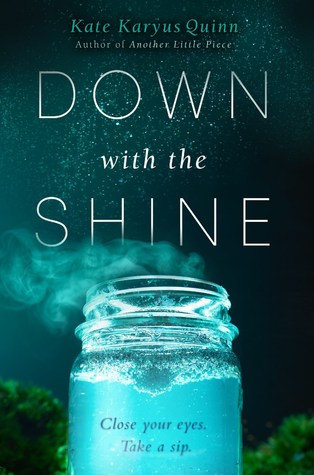 Goodreads Synopsis:
There's a reason they say "be careful what you wish for." Just ask the girl who wished to be thinner and ended up smaller than Thumbelina, or the boy who asked for "balls of steel" and got them-literally. And never wish for your party to go on forever. Not unless you want your guests to be struck down by debilitating pain if they try to leave.


These are things Lennie only learns when it's too late-after she brings some of her uncles' moonshine to a party and toasts to dozens of wishes, including a big wish of her own: to bring back her best friend, Dylan, who was abducted and murdered six months ago.

Lennie didn't mean to cause so much chaos. She always thought her uncles' moonshine toast was just a tradition. And when they talked about carrying on their "important family legacy," she thought they meant good old-fashioned bootlegging.

As it turns out, they meant granting wishes. And Lennie has just granted more in one night than her uncles would grant in a year.

Now she has to find a way to undo the damage. But once granted, a wish can't be unmade...

My Review:
This book was a lot of fun. That being said, sometimes it was too much fun. Like, a little on the ridiculous side. But that's okay, because there was also plenty of serious business times. A good balance.

Lennie's best friend Dylan was murdered six months ago and Lennie decides to go to a party to continue to "live". In the process, she steals some of her uncles moonshine, not fully understanding what the moonshine does. Lennie spends the evening getting her classmates drunk off the moonshine andbutalso she's granting their wishes as they sip the 'shine.

Naturally, all hell breaks loose, like the synopsis above says. W2 has steel balls, some kid has the "Cheetos Touch" and, oh yeah, her best friend is back from the dead.

Lennie is a pretty cool character. She's snarky and rough, but in a way that works for her. She's been raised by her three uncles and her absent mother. Lennie doesn't take anyone's shit, especially Smith's, who is Dylan's twin brother. I liked Smith a lot, too. He's a good match for Lennie, even if he's kind of forced to be with her at all times during about seventy-five percent of the book. (You'll just have to read and find out!)

Seeing how the kids change and how their minds work throughout the story is always the best part for me. They learn about sacrifice and friendship in a short amount of time and find out who truly cares about them. There were definitely some silly parts in this book, but a lot of hit-you-in-the-gut moments, too. Lennie has had a hard life and there are people who are determined to make it even harder on her.

Watching Lennie figure out what she needs to do to fix everything is pretty interesting. It takes a lot for her to set herself aside and I love how she does it.

This was fun and easy to read, if not a little silly at times.

Check it out when it comes out on Tuesday!


Thanks to Edelweiss and HarperTeen for the ARC.