(Review) Been Here All Along 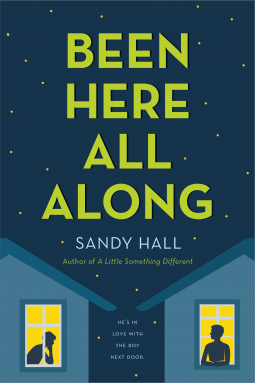 
NetGalley Synopsis:
Gideon always has a plan. It includes running for class president, becoming head of the yearbook committee, and having his choice of colleges. It does NOT include falling head over heels for his best friend, Kyle. It’s a distraction, it’s pointless—Kyle is already dating the head cheerleader, Ruby—and Gideon doesn’t know what to do.

Kyle finally feels like he has a handle on life. He has a wonderful girlfriend, a best friend willing to debate the finer points of Lord of the Rings, and social acceptance as captain of the basketball team. So when both Ruby and Gideon start acting really weird, just as his spot on the team is threatened, Kyle can’t quite figure out what he did wrong.

Sandy Hall, the author of A Little Something Different, is back with her signature wit in this quirky and heartfelt LGBT YA novel.

My Review:
I've really enjoyed Sandy's other books, so I was thrilled to be granted access to this one. Sandy has a way of writing simple characters with easy storylines that still make you feel all the feels.

I'll have to be honest, if we're friends on Goodreads then you saw my statuses and you should know that I'm a huge Chris Evans fan. Honestly, if you know anything about me you know that. The Chris references in this book pretty much did me in at 5%. I feel the same way about him that Kyle does.

This book is told from a few different POVs, but I think they all work well together. Gideon's were my favorite because he's a little nerdy and a lot snarky and I like that a lot in my characters. Gideon's life changes when he realizes that he has feelings for Kyle, his openly bisexual best friend whom he's known since before kindergarten.

From Kyle's POV you learn that he pretty much feels the same way, so it isn't hard for the boys to kind of come together with their feelings. The only problem is Ruby, Kyle's girlfriend. Ruby doesn't take the news well, even though Kyle is completely honest with her.

I feel like Ruby kind of devolved as a character and that was a little upsetting. She was a strong girl, but the breakup with Kyle and with her rebound boyfriend made her whiny and mean.

Ruby also has some incriminating evidence on Gideon which she tries to blackmail him with. It doesn't work, but she never deletes the pictures. In turn, her friend uses the pictures to cause trouble between Kyle and Gideon. This, of course, happened at the end of the book, but it gets tied up nicely and Ruby redeems herself a little.

I liked the easiness of Kyle and Gideon's relationship. It's a transition from friends to boyfriends that seemed fairly smooth. They have their awkward moments, their cheesy moments, and their sweet moments.

This book is cute and simple. I didn't have any real qualms with it. I feel like the characters could have been more developed, but I also think that this works for Hall.

Check this one out in August.

Thanks to McMillan Publishing Group and NetGalley for the ARC.