(Review) The Summer Before the War 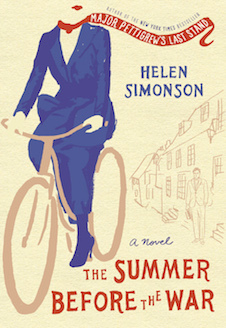 
Goodreads Synopsis:
East Sussex, 1914. It is the end of England’s brief Edwardian summer, and everyone agrees that the weather has never been so beautiful. Hugh Grange, down from his medical studies, is visiting his Aunt Agatha, who lives with her husband in the small, idyllic coastal town of Rye. Agatha's husband works in the Foreign Office, and she is certain he will ensure that the recent sabre rattling over the Balkans won't come to anything. And Agatha has more immediate concerns; she has just risked her carefully built reputation by pushing for the appointment of a woman to replace the Latin master.

When Beatrice Nash arrives with one trunk and several large crates of books, it is clear she is significantly more freethinking — and attractive — than anyone believes a Latin teacher should be. For her part, mourning the death of her beloved father, who has left her penniless, Beatrice simply wants to be left alone to pursue her teaching and writing.

But just as Beatrice comes alive to the beauty of the Sussex landscape and the colorful characters who populate Rye, the perfect summer is about to end. For despite Agatha's reassurances, the unimaginable is coming. Soon the limits of progress, and the old ways, will be tested as this small Sussex town and its inhabitants go to war.

My Review:
I really, really wanted to like this book. I love history and I love love, so I thought this would be perfect!

First off, I didn't hate this book. I just didn't like it a lot.

I tolerated it and made myself finish it, desperate for something to happen.

Okay, that sounds kind of mean, so I'll start over.

This book is long. I very rarely read books this long unless it's part of a beloved series. This book was full of information that I honestly feel could have been edited out. When the synopsis tells of more than two main characters it doesn't like. There were at least four to five different POVs all with no warning to the switch whatsoever.

It's starts with Beatrice, whom I believed the entire story was about. She moves to a small town to be a Latin teacher after her father's death. Beatrice is a self-proclaimed spinster at twenty-three. She's never described as beautiful, though she attracts the attention of many men in the town.

As Beatrice becomes a part of the town and a steady part in the live of Agatha Kent she becomes close with her nephews Daniel and Hugh. Hugh is obviously the one she will become involved with, but for the majority of the book he has promised himself to someone else.

It is interesting to learn about how WWI began and how different people reacted to it. I did enjoy being introduced to more characters and reading about them all coming together and interacting with each at the start of the war.

Beatrice was a good character. She stood up for her beliefs and for herself and didn't let any man define her. I think that's important and definitely stands out from a historical perspective. This book was absolutely full of strong women and I appreciated that. I liked Hugh and Daniel both. To me, Daniel showed the most growth throughout the book. All of the characters had some sort of backstory which was a little much sometimes.

I think if the book would have focused mainly on Beatrice and Hugh I would have been more satisfied. For the most part I feel like it just dragged on and then the ending felt too rushed and there was a lot, to me, left unresolved.

I enjoyed the premise, but think that the finished product was a little lackluster.