(Review) Just One of Those Things 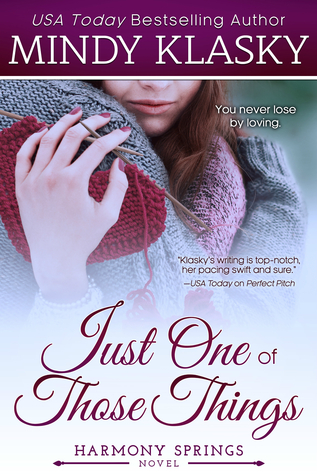 Just One of Those Things by Mindy Klasky
Publication Date: February 9, 2016
Pages: 330 (ebook)
Genre: Fiction/Romance
My Goodreads Rating: 4 Stars
Goodreads Synopsis:
Matt Dawson has returned to Harmony Springs after ten years of pitching in the major leagues. His father thinks he’s a screw-up who should have joined the Army instead of playing ball. His old buddies think he’s a hero with a bottomless bank account. But Matt knows he’ll never be a hero, not like his brother Jon, who recently died in Afghanistan.

Emily Barton once dated Jon but their break-up was brutal, made even worse when Matt tried to intervene. Years later, Emily remains trapped on an emotional treadmill, regularly changing her apartment, her job, and her boyfriend in a futile attempt to regain her earlier success.

Determined to give back to Harmony Springs, Matt opens an American Discount thrift store. But Emily recognizes a threat to the downtown shopping district and she organizes a grassroots campaign. Will she succeed at driving the American Dollar out of town—and Matt out of her life—forever?

My Review:
I have to say, I was pretty impressed with this book. I generally have a love/hate relationship with romances because I feel like they all follow the same cycle. (It's fine and it works...most of the time.)

This time it definitely worked. Emily is a strong-willed but seemingly lost character. She's thirty and bounces from job to job, home to home, etc... She's never on time and is a little unprofessional, but she's quirky and smart in an nonthreatening way. I did not like Emily at the beginning, she grew on me, lost my trust, and eventually regained it toward the end of the book.

Matt is a retired baseball player, moving back to his hometown to open a large discount store that is threatening the small town's local business.

This is where things get interesting. Emily launches a campaign to save local stores while Matt opens his new store. Things are kind of prickly for a while and it's pretty entertaining. The two characters have great banter when they're fighting over their businesses and you can definitely sense the other types of tension in their relationship.

They also have a sort of "sordid" history. Emily used to date Matt's brother, but he was "like a puppy who always made mistakes". After Emily and Jon broke up she and Matt shared a steamy moment that neither one of them had forgotten it.

I loved the history of everything in this book. The small town, the friendships, the sorrow. Coming from a small town it really resonated with me. There is so much sadness in Matt's life but he is constantly trying to stay positive and he truly believes in what he's doing.

Of course, Emily believes in her campaign as well. I also really liked how the two of them came together despite their differences and managed to make it work for a while. There was, of course, the typical drama and there were definitely things that were said that hurt. (This is where Emily lost me, to be honest.)

The ending was done wonderfully and it didn't seemed too rush at all. I loved the resolution of everything and the fact that they got through it all together.

This was a great read, check it out if you love sweet romances.