(Review) The Last One 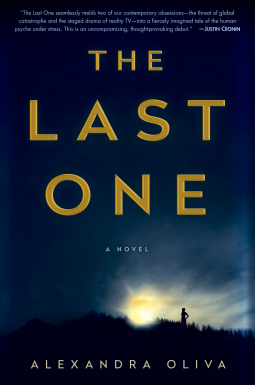 NetGalley Synopsis:
For readers of Station Eleven and The Passage comes a dazzling and unsettling novel of psychological suspense. In Alexandra Oliva's thrilling fiction debut, survival is the name of the game, as the line blurs between reality TV and reality itself—and one woman's mind and body are pushed to the limit.

She wanted an adventure. She never imagined it would go this far.

It begins with a reality TV show.

Twelve contestants are sent into the woods to face challenges that will test the limits of endurance. While they are out there, something terrible happens—but how widespread is the destruction, and has it occurred naturally or is it man-made? Cut off from society, the contestants know nothing of it. When one of them—a young woman the show's producers call Zoo—stumbles across the devastation, she can imagine only that it is part of the game.

Alone and disoriented, Zoo is heavy with doubt regarding the life—and husband—she left behind, but she refuses to quit. Staggering countless miles across unfamiliar territory, Zoo must summon all of her survival skills—and learn new ones as she goes.

But as her emotional and physical reserves dwindle, she grasps that the real world might have been altered in terrifying ways—and her ability to parse the charade will either be her triumph or her undoing.

Sophisticated and provocative, The Last One is a novel that forces us to confront the role that media plays in our perception of what is real: how readily we cast our judgments, how easily we are manipulated.

My Review:
I don't really know what I was expecting when I requested this book...I just thought it sounded weird and I like weird so I thought, why not?

Well, I got weird.

Zoo (as she is called in alternating chapters of the book) is a contestant on a reality television show focusing on survival in the wilderness. It's called, to the contestants, The Woods, and it's ridiculous. The contestants are all given nicknames based on what they do, so there are a quite a few characters to keep track of.

The book alternates between chapters of "the show" and Zoo's personal narrative. Zoo believes that she is on a Solo Mission as part of the show and, because the contestants have no way to communicate with the outside world, she doesn't know that something huge has happened.

When it really comes down to it...this is a good book. I feel like the plot is original and well written. The characters of the contestants are all different, some likable and some not. Those chapters where you get a glimpse of them are nice. You get a feel for the "show" and see how they work together. There are obviously a few that you loathe, like with any good reality show.

Zoo's chapters are a little bit darker than that, though. She's on her own and she's confused. Zoo thinks that everything she has seen so far has been a ploy of he show. She believes that the destruction she's seen is fake and she keeps searching for Clues.

It isn't until she finds another human does she finally get it.

I admire Zoo as a character, though. She's tough and no-nonsense. I think that, if I watched reality television and she were a contestant, then I would root for her. She has a sense of humor to match her sense of pride. I understood her thinking a lot. This book is definitely good at making you think about the way that the media plays things out. From her point of view it was all a game.

The point when she figures out it isn't a game is sad. She's broken and ashamed of some of the things she's done, but she has a confidant in the matter. A friend and someone to take care of.

I was a little disappointed in the ending. There was one little think I would have liked to have seen, but I'll just use my imagination to get what I want.

This was a good read. Plenty of suspense and it makes you think.

Check it out in July.