(Review) The Art of Not Breathing 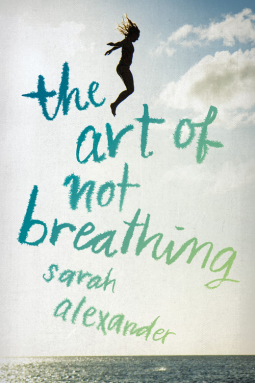 Goodreads Synopsis:
Since her twin brother, Eddie, drowned five years ago, sixteen-year-old Elsie Main has tried to remember what really happened that fateful day on the beach. One minute Eddie was there, and the next he was gone. Seventeen-year-old Tay McKenzie is a cute and mysterious boy that Elsie meets in her favorite boathouse hangout. When Tay introduces Elsie to the world of freediving, she vows to find the answers she seeks at the bottom of the sea

My Review:
I was super excited about this because NetGalley compared it to two of my favorite YA novels that also deal with grief in mysterious ways. This debut by Sarah Alexander did not disappoint.

Elsie is a sixteen-year-old girl whose family is still reeling over the loss of Eddie, Elsie's twin brother. It's been five years since Eddie disappeared and the family has all but fallen apart. Elsie isn't any better off than her family, though.

As tough as it was to read sometimes, I loved Elsie's POV. Everything about her is honest and raw. All of her feelings are just out there and she makes no apologies for who she is, either. I enjoyed that about her so much.

Things start to change when Elsie meets Tay. Tay introduces her to freediving and Elsie is immediately hooked. Of course, she isn't hooked because of adrenaline or because it's a fun sport. She's hooked because she thinks that if she can go deep enough it forces out flashbacks of the day her brother disappeared. She also becomes obsessed with finding him in the ocean.

While Elsie falls deeper into Tay and diving, her family is driven further apart. Her father moves out, her older brother is starving himself, and her mother is as absent as ever.

As this story unfolds you discover more secrets about the family and the small town that they live in and, ultimately, what happened to Eddie. If you read this blog a lot then you know that I love character growth and I definitely saw that with Elsie. She's a strong character to begin with and, even though she has to deal with so much, she never lets it get to her. Her mission is to find out what happened to her brother and she eventually does that.

There were parts of this book that were a little creepy, but it went well with the story.

Check it out in April.

Thanks to HMH Books and NetGalley for the ARC.