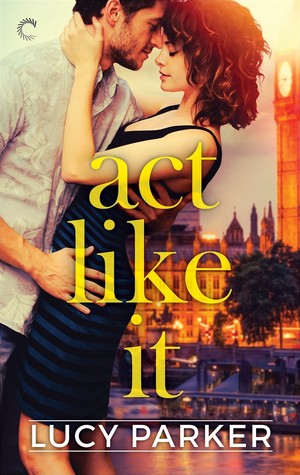 Goodreads Synopsis:
This just in: romance takes center stage as West End theatre's Richard Troy steps out with none other than castmate Elaine Graham.

Richard Troy used to be the hottest actor in London, but the only thing firing up lately is his temper. We all love to love a bad boy, but Richard's antics have made him Enemy Number One, breaking the hearts of fans across the city.

Have the tides turned? Has English rose Lainie Graham made him into a new man?

Sources say the mismatched pair has been spotted at multiple events, arm in arm and hip to hip. From fits of jealousy to longing looks and heated whispers, onlookers are stunned by this blooming romance.

Could the rumors be right? Could this unlikely romance be the real thing? Or are these gifted stage actors playing us all?

My Review:
As a single lady I usually spend Valentine's Day the same way every year. With my books, of course. I was so, so happy that I chose to spend the day with this book.

I'm sure the premise of this story has been done before. Bad bad and good girl hook up for publicity and only for publicity. That's going to end so well, right?

I seriously loved these characters from the beginning, even Richard. Richard is pretty much insufferable but there's something that just draws you in and makes you want to know all the secrets he hides behind his big, blue eyes.

Lainie is tough and no nonsense. She's ambitious and honest and...well, I'm running out of adjectives, but I liked her a lot.

This book starts out as a slow burn. The two are thrust together by the higher ups in their production company and forced to be seen together to bring good press to their play. Richard is, of course, not happy with the situation. But Richard is also kind of a dick and has to get used to it if he wants people to like him. (News flash: he doesn't.)

Eventually things progress and we get to see it from both POVs. I love that this book isn't written in first person, but we're still able to delve into both of their thoughts and pretty much "watch" them fall in love with each other. Both of them struggled, but there were so many moments that brought them together as they got to really know each other.

The sweetness of the moments never felt forced. And, though not all of them were sweet, they were definitely moments that brought them closer together. Watching them grow and interact with each other was so much fun. The banter between the two was perfect, as well. Even their snide comments make you want more from them.

Eventually the snide comments turn to something more. When the drama of the story kicked in, it wasn't until 80% so I knew it wouldn't last too long. I also knew that Lainie was going to fight for what she wanted and I love, love, love that she did. The ending was one of my favorite parts of the book because I love a strong female character and Lainie was definitely that.

I highly recommend this if you're looking for a sweet, easy read.