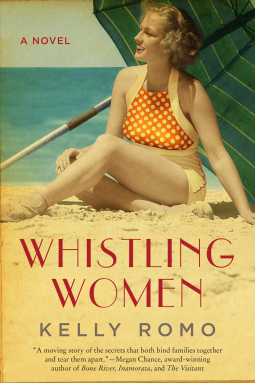 
Set against the backdrop of the 1935 world’s fair, Whistling Women explores the complex relationships between sisters, the sacrifices required to protect family, and the devastating consequences of a single impulsive act.
Kelly Romo’s assured and compelling debut novel, Whistling Women (Lake Union; November 17, 2015), takes readers back in time nearly a century to an America where economic pressures and shifting societal norms were shaping a new world. Centered on two indomitable female characters—a long absent aunt and the niece she never knew she had—this wholly original historical novel brings to life San Diego, circa 1935, as its dazzling world’s fair provides the backdrop for a story of family, fidelity, and the choices women have been forced to make to protect themselves and those they love.

After a life of downturns and narrow escapes, Addie Bates has found refuge in an unusual place. The Sleepy Valley Nudist Colony, north of San Francisco, is the brainchild of Heinrich, a German naturist with forward thinking ideas. To promote the benefits of his lifestyle—and the money that would come with an increase in visitors—Heinrich transports the colonists south to San Diego, where they will be an “exhibit” at the California Pacific International Exposition. Addie is reluctant to go, not out of any sense of modesty, but because she has a secret past connection with the city. She moved there as a teenage orphan to live with her then newly married sister, Wavey. Wavey—who for years returned Addie’s letters unopened until the younger sister finally gave up writing—still lives there. With trepidation, Addie hopes for a reconciliation.

What Addie does not know is that Wavey has not one daughter, as she remembers, but two. Rumor, the younger girl, is spirited and inquisitive, and when she encounters the stranger at the door who bears a striking family resemblance, she is intent on figuring out who this stranger is. But, Wavey refuses to tell her daughters anything or even admit that she has a sister. Determined to discover the truth, fifteen-year-old Rumor resorts to petty subterfuge in an effort to piece together the puzzle of the past. What she does not know, and no one is ready to tell her, is that Addie’s transgressions extend to the greatest sin of all: murder.

Steeped in meticulous research that brings Depression-era San Diego and the wonders and oddities of its famed world’s fair to life, and told with great poignancy and candor, Whistling Women underscores the limited choices that women had, not so long ago, in charting their own destinies.

I'm going to be honest here and admit that I only requested this book because it was a "read now" on NetGalley and I'm living with many "denied" feeling from NG right now. (It's fine.) I was pleasantly surprised however, once I got into the book.

It does take a while for that to happen, however.

This story is told from Addie's and Rumor's POV (they are aunt and niece who have never met). At first Addie's story is depressing despite the fact that she lives in a nudist colony. Well, come to think of it, Rumor's POV is also depressing.

Basically, this is a depressing story.

Also, those are my favorite kind.

So, Addie's nudist colony is traveling to the World's Fair in San Diego which is where her estranged family lives. She doesn't want to go but because of her age is risking being thrown out of the nudist colony and decided she should.

Addie has a deep, dark past that it seems no one in her colony knows. You don't really get glimpses into the past until after she sees her family and it starts to tell more of what happened to Addie when she was young and why her sister doesn't want to see her.

Rumor is stubborn and independent, much more than her older sister Mary. Wavey, their mother, forbids them to see Addie so of course Rumor goes.

I love Rumor's consistency. She knows that she's been lied to and she wants to figure out the truth and she wants to know her Aunt Addie, which is what Addie secretly craves. As Rumor gets closer, Addie pulls away and all of their lives start to unravel.

There are so many emotional things that happened to Addie and Rumor in this book. Some of the scenes were difficult to get through, but I think they were important to the story. It helps to understand why Addie has chosen the life she has. Rumor's incidents don't happen until later, but they bring the family together and make them even stronger than before.

The parts with Wavey were annoying until about 85% through the book. I thought she was rude and selfish, but there is a scene with her and Addie that got me a little emotional toward the end. I love to see broken relationships mended and I think Romo did that part well. I'm especially a sucker for sister stories.

I'm glad I took a chance on this one, it definitely kept my attention with all its twists and turns. A fun ride.