(Review) If You're Lucky 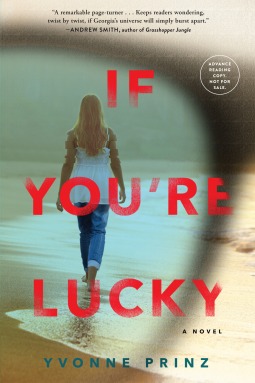 
Goodreads Synopsis:
Is Georgia’s mind playing tricks on her, or is the entire town walking into the arms of a killer who has everyone but her fooled?

When seventeen-year-old Georgia’s brother drowns while surfing halfway around the world in Australia, she refuses to believe Lucky’s death was just bad luck. Lucky was smart. He wouldn’t have surfed in waters more dangerous than he could handle. Then a stranger named Fin arrives in False Bay, claiming to have been Lucky’s best friend. Soon Fin is working for Lucky’s father, charming Lucky’s mother, dating his girlfriend. Georgia begins to wonder: did Fin murder Lucky in order to take over his whole life?

Determined to clear the fog from her mind in order to uncover the truth about Lucky’s death, Georgia secretly stops taking the medication that keeps away the voices in her head. Georgia is certain she’s getting closer and closer to the truth about Fin, but as she does, her mental state becomes more and more precarious, and no one seems to trust what she’s saying.

As the chilling narrative unfolds, the reader must decide whether Georgia’s descent into madness is causing her to see things that don’t exist–or to see a deadly truth that no one else can.

This book was definitely interesting and kept my attention pretty well. Georgia's older brother Lucky dies in a surfing accident in Australia and it does a number on their family. Her mother is withdrawn and Georgia is already going through so much that Lucky's death just adds on to all of it.

Enter Fin, Lucky's "best friend", whom everyone immediately falls in love with. Her father takes him to work, her mother invites her to dinner, her boss hires him, and Lucky's girlfriend starts dating him!

Fin is perfect, but Georgia knows better. So, in order to find out more about Fin she stops taking medication that helps control her schizophrenia. It works for a while. Georgia can see things more clearly, but eventually she starts to see things. Mainly her dead brother.

I really love the way to Georgia jumps into things without any regard to basically anything else. She just knows that something is wrong because she knows her brother. Her detective skills leave a lot to be desired but she definitely had the instinct to try and figure everything out.

Georgia's family is who annoyed me the most. Well, them and Lucky's old girlfriend. They all welcome Fin into their lives without any question and only Georgia strives to find the truth.

The only problem I really had with this was that I felt the ending was a little rushed. After Fin's big reveal you don't really find anything else out. Everyone just kind of goes about their business and sweeps is all under the rug. I would have like to have seen more fallout on Fin's part or to have seen more glimpses from Lucky's life.

I did enjoy seeing Georgia figure it all out and get her life back on track though. I always love character development.