(Review) Such a Rush 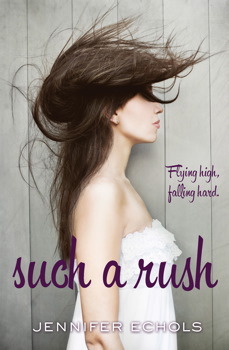 Such a Rush by Jennifer Echols
Publication Date: 2013
Pages: 336 (Paperback)
Genre: Young Adult
My Goodreads Rating: 3 Stars
Goodreads Synopsis:
High school senior Leah Jones loves nothing more than flying. While she's in the air, it's easy to forget life with her absentee mother at the low-rent end of a South Carolina beach town. So when her flight instructor, Mr Hall, hires her to fly for his banner advertising business, she sees it as her ticket out of the trailer park. Then Mr Hall dies suddenly leaving his teenage sons, golden boy Alec and adrenaline junkie Grayson, in charge of running the business. The two brothers have always made their hostility towards her clear so she's sure that her dreams of being a pilot are over…
Then it Grayson makes it clear that he wants her to stay working for him, and Leah doesn't understand why. She's crushed on him for years, but always known he's out of her league… isn't he? As the summer rolls on and they spend more time together the spark between them grows, but with Alec's feelings starting to change too, suddenly things become a whole lot more complicated. Now Leah finds herself drawn into a battle between brothers - and the consequences could be deadly…

My Review:
This was not my first book by Jennifer Echols, but it is the one that I like the most so far.

Leah is tough and smart, and I like that. So many times in young adult we see the girls that are the damsel in distress and it gets tiring (even to read as not-a-young-adult). In fact, Leah doesn't need anyone's help, nor does she want it.

She saved money to get a flying lesson, hid it from her mother, and managed to become a pilot by the time she was a senior in high school. Of course, things go down hill when her boss Mr. Hall dies and his son's come to take over the business.

The drama in this is pretty simple. Leah likes Grayson, Grayson wants Leah to date Alec so he won't leave, Alec plays along. It's not rocket science, but there is still a lot that keeps Grayson away from Leah.

For one, the brothers think that she was having an affair with their father. Also, Grayson has some intense anger issues that he's working through, but he is never violent toward his family or friends.

I wasn't too crazy about the supporting characters in this one. Leah's best friend Molly was kind of horrible throughout the entire book and really doesn't know anything about Leah. Leah's mother is the worst and when she does show up she is so much worse that I don't know how it's possible.

In the long run things work out for Leah. I love the way that her relationship with Grayson slowly forms. They have a lot of walls to break through and it's done well.