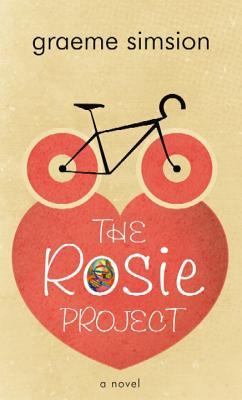 The Rosie Project by Graeme Simsion
Publication Date: 2013
Pages: 357 (Hardcover)
Genre: Adult Fiction
My Goodreads Rating: 3 Stars
Goodreads Synopsis:
Don Tillman, professor of genetics, has never been on a second date. He is a man who can count all his friends on the fingers of one hand, whose lifelong difficulty with social rituals has convinced him that he is simply not wired for romance. So when an acquaintance informs him that he would make a "wonderful" husband, his first reaction is shock. Yet he must concede to the statistical probability that there is someone for everyone, and he embarks upon The Wife Project.

My (spoilerish) Review:
I'm going to preface this by saying this book wasn't even on my TBR pile. I showed up for teacher training and a friend had brought me three of her own personal library books. (Best friends let each other borrow library books.) We often trade books back and forth and we know what the other likes, so I went with it.

It took me a while to get into this initially. I usually judge a book by how many days it takes me to read and technically it took me a week to read this.

Okay, enough complaining. The story starts off with Don covering a lecture for his friend Gene on Asperger's. One of my first thoughts while reading this was: "Does Don know he has Asperger's?" Well, Don knows that he's weird and different. He knows that he's intelligent, doesn't have many friends, and doesn't date much. This is why Don invents The Wife Project. A project that begins with a ridiculous questionnaire in an attempt to weed out women who are not compatible with Don.

Enter Rosie: she smokes, she drinks, and she's always late. She's not the type of woman Don wants to build a relationship with, but he does- a working one- as he sets out to help Rosie find her biological father.

I'll admit some of their interactions are cute. Don seems fascinated by Rosie and he goes through great lengths to help her. Rosie seems to really like Don when she isn't talking about what she thinks he should change or when she's trying to take control of his life. I hated the fact that Gene was the one who pushed them together because, in my opinion, Gene is scum. (I do like his wife Claudia.)

I found myself skimming some parts, anxious for more dialogue rather than the time Don spent in his head analyzing everything. Don does make a conscious effort to change for Rosie, and she appreciates it, though part of her is still skeptical about whether or not Don can actually love her.

The ending, to me, was the best part. It was nice to see the way things came together. I'm sure I'll be picking up the sequel here in the next few days.