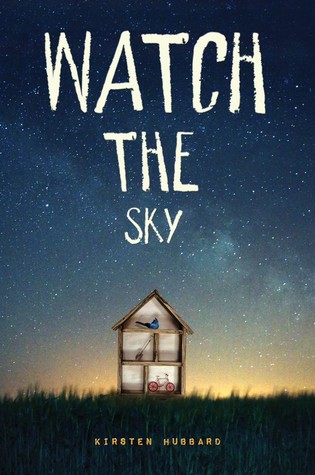 Goodreads Synopsis:
The signs are everywhere, Jory's stepfather, Caleb, says. Red leaves in the springtime. Pages torn from a library book. All the fish in the aquarium facing the same way. A cracked egg with twin yolks. Everywhere and anywhere. And because of them Jory's life is far from ordinary. He must follow a very specific set of rules: don't trust anyone outside the family, have your works at the ready just in case, and always, always watch out for the signs. The end is coming, and they must be prepared.

School is Jory's only escape from Caleb's tight grasp, and with the help of new friends Jory begins to explore a world beyond his family's farm. As Jory's friendships grow, Caleb notifies Jory's mother and siblings that the time has come for final preparations.

They begin an exhausting schedule digging a mysterious tunnel in anticipation of the disaster. But as the hold gets deeper, so does the family's doubt about whether Caleb's prophecy is true. When the stark reality of his stepfather's plans becomes clear, Jory must choose between living his own life or following Caleb, shutting his eyes to the bright world he's just begun to see.

My Review:
This one kept calling to me every time I went into the bookstore (don't they all?), so I finally picked it up a couple of months ago, put it on the shelf, and didn't read it. My books are so unloved here. Anyway, I loved the cover and was intrigued by the premise and now, being as I left my kindle in a friend's car, I thought I'd give it a try.


Jory seems like a regular kid. He goes to school, he does chores, he plays with his siblings...stuff like that. But Jory is pretty much a loner at school and people notice. They notice his combat books and his cargo pants. They notice that he doesn't talk to anyone and never participates in class.

So, enter Alice. Alice is pretty and smart and somewhat popular. What I love about Alice is that she doesn't take Jory's loner crap and basically forces him to be her friend. It's kind of cute.

Of course, as soon as Jory makes his first friend, his stepfather Caleb goes off his rocker. Well, he's been off his rocker since the beginning but it really takes a turn for the worst. Caleb is convinced that something is happening. He looks for signs, he hates "Officials", he keeps secrets. But, according to Jory's mother, he does it all because he loves them.

The family starts digging in a canyon behind their house even though Caleb won't tell them what it's for. Eventually Jory figures it out and is no less confused than he was from the beginning of the story.

To me, the ending was sort of lacking. There was so much build up to something and then there was kind of...nothing. I mean, I thought the ending was fine but I was really expecting something huge to come about with all of the signs.

One thing I loved was Jory's relationship with his sister Kit. She was a selective mute, but had such great facial expressions that Jory could read her face. I loved reading about their interactions and seeing their relationship grow.

This was a quick, easy read with a little bit of a mystery in it.