(Review) The Sky is Everywhere 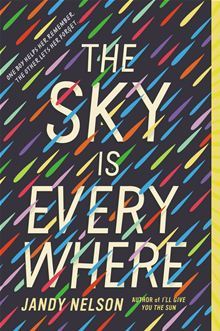 Goodreads Synopsis:
Seventeen-year-old Lennie Walker, bookworm and band geek, plays second clarinet and spends her time tucked safely and happily in the shadow of her fiery older sister, Bailey. But when Bailey dies abruptly, Lennie is catapulted to center stage of her own life - and, despite her nonexistent history with boys, suddenly finds herself struggling to balance two. Toby was Bailey's boyfriend; his grief mirrors Lennie's own. Joe is the new boy in town, a transplant from Paris whose nearly magical grin is matched only by his musical talent. For Lennie, they're the sun and the moon; one boy takes her out of her sorrow, the other comforts her in it. But just like their celestial counterparts, they can't collide without the whole wide world exploding.

This remarkable debut is perfect for fans of Sarah Dessen, Deb Caletti, and Francesca Lia Block. Just as much a celebration of love as it is a portrait of loss, Lennie's struggle to sort her own melody out of the noise around her is always honest, often hilarious, and ultimately unforgettable.

My Review:
I loved I'll Give You the Sun, so I was really excited to read this one by Jandy Nelson and she did not disappoint. This was a great story about a family piecing themselves back together after Bailey's sudden death.

My first reaction to Lennon was that she was a little bit crazy. I mean, the first few pages were about being "sex-crazed" and how she made out with her dead sister's boyfriend at the funeral. So, that definitely got my attention.

You learn a lot about Lennon and her family in those first few pages. Her grandmother is spiritual, her Uncle Big is a pothead, and Lennie has basically let herself go because of Bailey's death.

Then here comes Joe. Joe is the new kid in a town. A musical genius from a family of musical geniuses. He's drawn to Lennie almost immediately, and it's the same for her. What I love about Joe is that he knows that the family is suffering but he puts himself in the middle of it all. Joe shows up and makes coffee, brings breakfast, and puts the family back together. I loved that about this story. He doesn't ask, he just does it because he knows that's what they need.

Joe and Lennie's relationship starts fairly quickly, but in a cute way. Of course, Toby is trying to ruin it all. Well, not on puporse. Toby is Bailey's boyfriend who is seriously suffering from her loss considering they were engaged and going to have a baby when Bailey collapsed and died. I didn't hate Toby, but I wasn't crazy about his character either.

I can't really say much without spoiling what happens, but there's definitely drama here. Lennie is young and naive and wants to do what's best for those around, but she's also pretty selfish. The story of the girls' mother plays a big part in her selfishness. It's a tough one and a secret that her grandmother has been holding in for a long time.

Stories like this always get me because I love seeing families come together through hard times. Nelson does an amazing job writing that with this book.