(Review) In the Language of Miracles 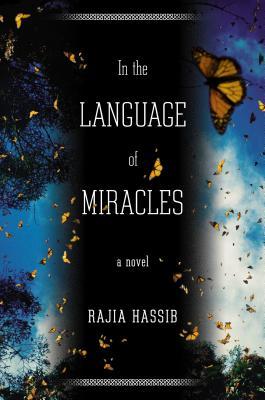 My Review:
This was an excellent story about a family's pain and how they work to get through it...or don't. What I loved most about this was that Hassib didn't focus too much on the even that tore the family apart, but dealt more with the family's feelings around everything.

The family is torn apart by the grief of losing their oldest son, but also because of the way he died. Post 9/11 the Egyptian family has become social outcasts when it comes to their little town in New Jersey. Samir, the family's patriarch is having the hardest time with the social aspect of their situation and desperately wants to make it better by speaking at the memorial of the girl whom his son shot and killed before he killed himself.

Of course, the entire family is against this and wants nothing to do with his idea. I liked that it told the story from different perspectives, though I would have liked to have heard from Fatima, the younger sister, more. Hosaam's actions and death affected each of them differently, but we didn't really see much of how Fatima felt.

I feel like this was really Khaled's story, and not Hosaam's. Khaled always felt overshadowed by his big brother, even in death. His relationship with Brittany was very sweet and I liked the way he was able to open up to her about everything he had been feeling.

Eshan was probably my favorite in the family. I loved her faith and how it trickled throughout all the other storylines. This book did a nice job of incorporating Muslim customs and helping readers to understand who might not be familiar with the religion.

The ending was as I expected, though I had hoped everything would work out the way Samir wanted it to. I did love that we go to hear from Khaled one last time and that it seemed like things at least worked out for him.

This was a great, emotional read. I'd recommend it to others.