(Review) Don't Get Me Wrong 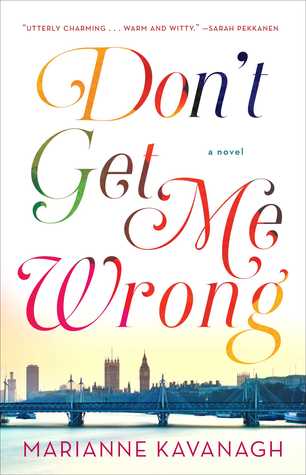 Goodreads Synopsis: For fans of Jojo Moyes, David Nicholls, and Sophie Kinsella, here is a Pride and Prejudice for the modern era: Londoners Kim and Harry can’t see eye to eye...until the life of the person they both love most hangs in the balance.

Kim and Harry are total opposites who happen to have the same favorite people in the world: Kim’s older sister, Eva, and her young son, Otis. Kim has never seen what her free-spirited big sister sees in a stuck-up banker like Harry and has spent her childhood trying to keep him out (must he always drive the most ostentatious cars and insist on charming everyone he meets?), while Harry’s favorite occupation is provoking Kim.

Both Harry and Kim are too stuck in their prejudices to care about what’s really going on beneath the surface of each other’s lives. They’ll never understand each other—until the worst of all tragedy strikes. Faced with the possibilities of losing the person they both love most, long-buried secrets come to a head in ways that will change both Harry and Kim forever.

As in her “hilarious, poignant, and profound” (Daily Mail) novel For Once in My Life, Marianne Kavanagh tackles the bonds of family, friendship, and love through sophisticated storytelling. Don’t Get Me Wrong is a witty and heartwarming book that will charm readers everywhere

My Review: Honestly, I had a rough time with this book. The beginning draws you in immediately. There's obviously some sort of distress between the two main characters, Kim and Harry. From the firs moment they see each other you can sense the tension between them. They first see each other in a hospital waiting room and hardly even have an exchange before the book takes you back nine years.

To me, the first half of the book is a little confusing. The narrative switches between both Harry's and Kim's point of view, but without warning of the change. It doesn't take long to get the hang of the change, but when I finally did there was a part of Izzie's story in there, too. (Izzie is Kim's best friend.)

The switches back and forth from Harry to Kim and how their lives change, but still tend to revolve around Eva, Kim's older sister. They both love Eva deeply so, when Eva ends up pregnant, it brings all three of them closer together. Well, it brings them together but not necessarily closer.

Kim has this insane hatred for Harry that is never really justified. She thinks he's arrogant and rude, a charmer and a cheater. In reality, Harry is pretty much the opposite of what she thinks. Kim only knows what she has made up in her own mind or what her mother has told her about Harry, which is that he's a rich, spoiled brat. Learning about Harry's actual backstory is quite sad and kind of makes you dislike Kim a little (more than already, to be honest) and really start to root for Harry.

Things pick up at about seventy-five percent. The story turns a sad page and Kim falls into despair. It's a weird kind of turning point for her and, without giving too much away, it is something that needs to happen to advance the story.

I honestly found Harry the most likable character, not Kim. She was constantly judging Harry and others, while remaining completely selfish- even after the life-altering event happens.

The most important part of the story obviously happens within the last ten percent. There are things that you sense from Harry throughout the book that finally come out within the last few pages. It wasn't too hard to figure out what Harry's feelings truly were and when he finally voiced them I cheered on the inside.

Of course, the reveal happens within the last THREE PERCENT of the book, so there isn't much time to enjoy it. The ending feels a little rushed but part of me liked the open-endedness of it. It left plenty to the imagination.

Thanks to NetGalley and Atria Books for the ARC in exchange for an honest review.
adult fiction drama family drama netgalley read